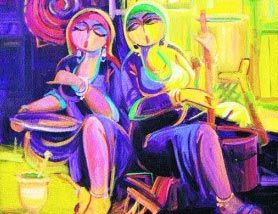 Women of his Memories

Women of his Memories

Iraqi artist Shakir Al Alousi doesn't want to talk politics. Nor hold forth on the deteriorating situation in his homeland.
"What is left to say?" he asks. Al Alousi's latest exhibition titled Women from the Orient features 46 paintings from a time in the past which he prefers to "remember", as opposed to the present he chooses not to comment on.
With no apparent preference for any particular medium, Al Alousi's present set of collection ranges from oils and watercolours to acrylics.
From the Baghdad of the 1950s and 1960s, Al Alousi's women are prosperous-looking and curvaceous with well-defined kohled eyes. Whether they are indulging in carefree banter or sifting flour in the kitchen, their figures and faces are kissed by different plays of light and make for much more than a pretty painting on a wall.
Etched from the past
There is without doubt a sense of longing for the good times that were and even though Al Alousi doesn't admit it, the timing of his exhibition couldn't have made a more powerful statement on Iraq's present state.
Al Alousi was born in 1962. "Those were peaceful times," he recalls, drawing on tales and images his parents and relatives shared with him while he was growing up. Talking of his fourth solo exhibition, he says: "It is more of a document of that beautiful era and is a memory from the past. It is a hope that the country will be able to settle again."
Al Alousi has stayed loyal to the Impressionist Baghdadi school of art style and says there is no need for one to be realistic at all times or refer to real life to create art. "No, it is not a form of escapism," he says, "but more a form of remembrance."
Al Alousi's works have been heavily influenced by Jawad Salim, a pioneer of the modern art movement in Iraq, who died prematurely at the age of 41. "He is the man behind our country's best known sculpture, the Monument of Liberty," Al Alousi says.
Despite the art world's fondness for creative exports from conflict zones, Al Alousi says he has not noticed any obvious demand or apparent appreciation in the prices of artworks by Iraqi artists.
Having relocated to Amman, Al Alousi says that the days of a thriving art culture in Iraq are a thing of the past. "No one can exhibit. No one can step out to view the exhibition. No one can step out of their homes. An artist needs inspiration, yes. But an artist also needs the promise and assurance of a safe, secure and somewhat settled environment to work in," he says.
Al Alousi is surprised at a question about artistic freedom in the country prior to his departure in 2003. Common perceptions that Saddam Hussain's policies extended to the arts have often been proven false by many Iraqi artists. While it was widely known that artists were lavishly rewarded for producing presidential portraits, others who chose their own creative expression were allowed to do so without being punished.
"In Baghdad alone there were about 40 galleries. All were full. Always with exhibitions and all of them, as I remember, were doing extremely well. There was no censorship," he says.
Al Alousi has mostly worked on subjects of human interest. "I like to work around the lives of people. Everyday stories. Everyday activities and just the daily routines," he says.

Designed and Powered by ENANA.COM